The Letter F is for Forms

If you have been following JayFleischman's blog about the alphabet soup of bankruptcy, beginningwith the letter A, for Abandonment, then it is no surprise the letterB is for Bank Account, C is for Creditor, and D is for, you guessedit, Debtor. But, I bet you didn't think E would be for Executory Contract. I thought this was interesting.

Well the next on the list is F. What could this stand for? Well, it could stand for a four letter word; something you say when you receive a call from a debt collector, or one of their hart to hart letters that you through to the side and don't open because you know what is inside. Well, fortunately, we are not going down that road. At least, not in this blog, as I, and my clients, believe in taking the upper road.

F stands for Forms, and not just any forms. These are the official forms for filing bankruptcy, and as chance would have it, the specific form F refers to is called Schedule F. Why they call it a schedule, instead of a form, I really don't know, but if I were to guess, I would say it sounds more official, or politically correct. Yes, it's called a schedule, but it sure looks like a form to me.

So, why is this form important? Well, of the schedules that are filed in a Chapter 7 or Chapter 13 bankruptcy, which consist of Schedule A through Schedule J, this is be far the most widely used. This is where all the non-priority unsecured debts are listed; debts like credit card and medical bills are listed on this form. Generally, when I ask someone who they owe money to, it goes on this form as long as it is not the IRS (depending on the year taxes are due from), or a domestic support obligation (alimony, child support), or a secured creditor (mortgagee, auto loan). 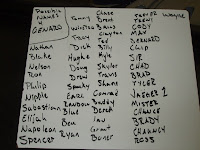 It consist of the name of the creditor, along with anyone else associated with the debt, like a debt collector, their respective addresses, the amount of the debt, and whether or not the debt is disputed. It is very important to list all creditors that should be listed on this form, as if you forget to list someone, you not only could still owe that creditor after your discharge (which is what I thought the letter D should be for), but you may be prohibited from discharging the debt in a subsequent bankruptcy.

I wonder if creditors, after receiving a commencement letter indicating someone has filed bankruptcy, thinks of a four letter word beginning with F while placing the paper in the debtor's file.
Posted by J. Dinkins G. Grange at 11:44 AM

I am located in Green Cove Springs on US 17 near the Clay County Courthouse, serving Baker, Clay, Duval, Nassau, St. Johns, and Putnam counties.